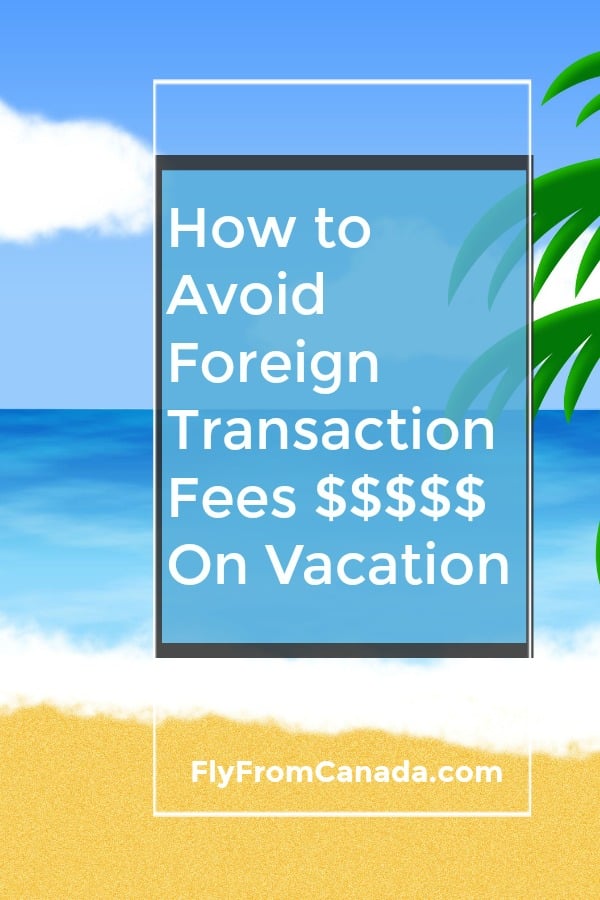 With the Canadian dollar being so low for such a long time, Canadian travellers are getting used to having to add an additional 20-30% when travelling outside Canada, especially when travelling to the US.

Avoiding foreign transaction fees is a painless way to free up some extra cash for your trip.

Travelling abroad is never cheap, especially when the Canadian dollar is as weak as it is now (hovering around 77 cents U.S.). But there’s a simple way to trim your expenses without resorting to things like downsizing your hotel room or opting for the cheaper car rental.

Eliminating – or at least minimizing – foreign transaction fees is a painless way to free up cash that you can use to treat yourself to a nice meal or buy an extra souvenir without stretching your travel budget, said Toronto-based personal finance and travel expert Barry Choi.

Foreign transaction fees are charges you may encounter when you make purchases with a foreign currency, whether you’re travelling or, say, sitting on the couch and shopping online in U.S. dollars. That’s in addition to the implicit cost of facing an unfavourable exchange rate, which reduces your buying power.

Choi offers a few tips for keeping the cost of using foreign currency to a minimum.

Most Canadian credit cards apply a spread of 2.5 per cent on the market exchange rate when you make a purchase in a foreign currency, Choi told Global News. It wouldn’t be surprising if you’d never noticed this, as these fees are often baked into the exchange rate, he added.

“Not even all credit card providers’ customer service teams know about this fee, which results in conflicting information,” Choi wrote on his blog Money We Have.

Luckily, there are a few credit cards that savvy travellers can turn to to avoid those charges. According to Choi, the best ones are:

Getting some foreign cash before you travel can also bump up your travel costs, if you aren’t careful.

Relying on your bank is probably the easy option here, but could also be one of the priciest. Canadian banks generally apply a reasonably small spread on the spot exchange rate when dealing with common currencies like the U.S. dollar or the Euro, Choi said. But if you’re travelling to more exotic destinations, “they can easily charge upwards of 10 per cent on the spread,” Choi writes.

You should forget about traveller’s cheques, too. Hardly anyone accepts them anymore, and you’ll face a commission on the cheques on top of the currency exchange spread, Choi said.

Your best bet is to head to a foreign exchange office in your hometown. Choi advises looking for an office that offers an exchange spread of less than 2.5 per cent and charges no additional fees.

In most cases, though, the cheapest way to get foreign cash is using ATMs in your destination country, according to Choi. That said, you should still plan to have some foreign currency in your pocket before you land – enough to cover a cab ride to your hotel, at least.

ATMs all over the world usually charge you just 2.5 per cent on top of the market exchange rate, which makes them a very convenient option, Choi said. Your bank may add a fee of $2 to $5, but may be willing to waive that, he added.

The trick is figuring out where you can use your debit card abroad. (Never use your credit card to get cash, which incurs steep cash advance fees.) If you look on the back of your debit card, you’ll likely see a PLUS (Visa) or Cirrus (Mastercard) symbol. When you travel, you should be able to use your Canadian debit card at foreign ATMs that display the same symbol.

Both VISA and Mastercard have ATM locators that let you identify the cash machines closest to wherever you’re going to be.

Choi also suggests looking into online services like TransferWise to see if you might be able to pay some of your bigger travel expenses in advance via wire transfer and avoid higher foreign transaction fees on vacation .

“Their fees are much lower than banks,” he said.

More on Travel Hacks and Tips

Using The Internet to Travel – FAQ