One of the most beloved travel destinations in Canada is the Banff and Lake Louise area located in the province of Alberta. The town of Banff is 90 minutes (75 miles) west of Calgary and is within the Banff National Park, a UNESCO World Heritage site.

One can see the Rocky Mountains from Calgary since the Banff area is at the eastern edge of the Canadian Rocky Mountain range. It is also one of the most visited areas in Canada all year round since the rugged beauty of the mountains and the protected wilderness draws tourists from around the world. During the winter, the three local resorts of Sunshine Village, Norquay Mystic Ridge and Lake Louise offer some of the best snow skiing around.

There are numerous shops, restaurants and small to mid-sized hotels in Banff which is why the majority of travelers use it as the base during their stays. The town itself is small enough to walk around in since large scale development is limited since Banff is located within a national park. As a result, the town of Canmore just outside the national park boundary has become a recent spot of development.

This offers tourists with rental cars another choice for hotels in Banff. There is a complete range of accommodations from budget motels to the ritzy and majestic 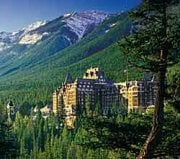 Fairmont Banff Springs Hotel overlooking the nearby valley. Many hotels in Banff have views of the mountain ranges and I can personally claim that there is something very magical about waking up and seeing a snow capped peak first thing in the morning, particularly during the non-winter season.

Like the choice of hotels in Banff, the range of dining opportunities covers the entire spectrum as well. Travelers can dine at the most fancy eating establishments or buy their own groceries at the local grocer. One thing for beef lovers is not to miss the Alberta prime rib here which is a local specialty. It practically melts in your mouth. Some restaurants serve very generous 24 ounce (or higher) portions called mountain cuts for those who think they can eat it all.

There are numerous activities during the non-winter seasons including hiking, horseback riding, fishing, golf and a hot springs spa heated naturally by the mountain. The wonderful mountain scenery just makes these activities seem that much more special here. Imagine golfing with views of mountains in the background and glimpses of elk. Of course, the winters have the skiing and snowboarding but there are other winter activities such as dog sledding and snowmobile tours.

For skiers and boarders, there is a very good bus shuttle system set up which picks skiers up at various locations around town and transports them to any of the three ski resorts mentioned earlier. Some shuttle stops are right outside of the many hotels so for many, it can be door to slope and return service. Most skiers opt to ski all three resorts during their stays.

Lake Louise is about 45 minutes (35 miles) further into the mountain range and home to one of the largest ski areas in North America.

World class events are held here as well as a previous winter Olympics and the resort Lake Louise is serviced by the ski shuttle system from Banff. Even for non-skiers, a day trip to Lake Louise is a must.

The largest hotel there, the Fairmont Chateau Lake Louise , is right beside the beautiful Lake Louise itself. There is a glacier named Victoria Glacier which is nestled between snow capped mountains. During the winters, the lake is completely frozen and people can walk right across it. The hotel usually sets up a skating area on the lake.

During the summers, one can still see some of the white snow capped peaks along with the glacier but what makes things really special is the lake itself too which is an emerald green color.

On certain days and hours, the lake gives a stunning reflection of the mountain/glacier scene. This combination offers one of the most beautiful and photographed scenes in Canada. No motorized boats are allowed in the lake but there are canoe rentals available. Taking a canoe across the lake while seeing the glacier and mountain range is one of the most special, peaceful activities one can do.

The wildlife in the Banff and Lake Louise area is another attraction. There are wildlife spotting tours available but every time I have traveled to the area, I’ve seen deer and elk along the roads and highways. I’ve even seen them wander right into the front of the Banff Springs hotel. The road that leads up to the Norquay Mystic Ridge ski resort just outside of Banff is a golden spot for wildlife. On every drive up that particular road whether during the winter or summer, I have always seen curly horned mountain goats. Many are so used to cars that they would just move aside for vehicles to get by but would still stay on the roads. This makes great photo opportunities.

One thing to be careful of especially when hiking is the possibilities of bears. During the non-winter seasons, pay attention to the local rangers who give reports of bear sightings as it is not recommended to go on trails where bears have been recently.

Many world tourists think of Canada as a land of wonderful natural scenery and although the country is much more than that, the Banff and Lake Louise area is probably one of the best examples of Canadian natural beauty. It is a place that draws visitors, foreign and Canadians alike, back to the area like it does for me every few years.

About the author:Clint Leung is owner of Free Spirit Gallery, an online gallery specializing in Inuit Eskimo and Northwest Native American art including carvings, sculpture and prints. Free Spirit Gallery has numerous information resource articles with photos of authentic Inuit and Native Indian art as well as free eCards.