Home Travel Deals Fly from Vancouver to Australia for $990 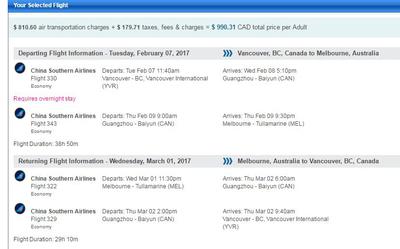 We found this great flight deal from Vancouver (YVR) going to Mebourne, Australia (MEL) in February 2017.

These low rates are available with China Southern Airlines and have one layover in Guangzhou, China on the way there and back.
Save at least $500 – similar flights are coming up for $1488-$2,654.

We found the flight via Flight Network or by searching Google Flights.

Fly From Canada to Hawaii for $459