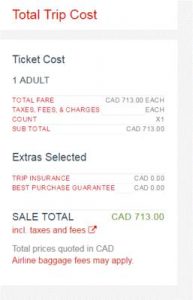 We found this great flight deal from Toronto (YYZ) going to the Bangkok, Thailand (BKK).

This flight is with Air China which is operated by Air Candada on some of the segments. The cheapest rate we found was via Webjet.ca or via Flight Hub.

There are two stops on both the outbound flight and the return flight.

Have you found a cheaper airfare? Post it here \/

Fly From Canada to Hawaii for $459

Travel for Canadians: A Canadian Traveller’s Top 5 List of Places...

Travel for Canadians: A Canadian Traveller’s Top 5 List of Places...